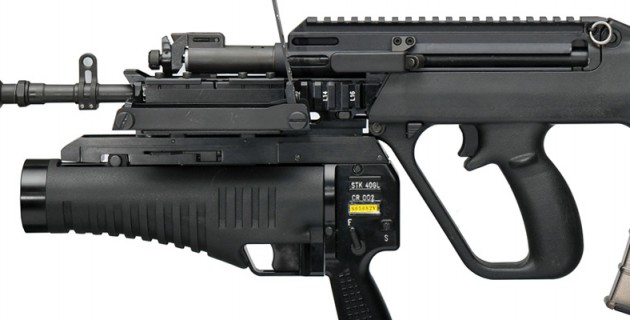 ST Kinetics: Singapore on the Move

Several years ago, SADJ visited ST Kinetics at their factory in Singapore and reported on their small arms innovations and products (SADJ V2N2, online at sadefensejournal.com)  in 2012, we returned for an update.  Singapore Technologies Kinetics, also called ST Kinetics, is a large land systems and specialty vehicle company covering the southeast Asia region.  it’s a four decade-old company that is a division of ST Engineering.  ST Kinetics has over 20 locations, over 6,000 workers, and is working all over the world in sales – primarily in its vehicle systems.

Compact Personal Weapon
During our last visit, we were able to see the newest offerings from the ST Kinetics Small Arms Division.  The CPW, or Compact Personal Weapon, was the first item we looked at.  We were impressed with the ergonomic design, the light weight, and the multiple caliber concept.  On this visit, we got a deeper look at a matured design that is coming to market.  The choice was made to stay with 9x19mm due to the prevalence of the caliber in the world market, as well as the proven ballistics and terminal performance.  ST engineers have experimented a lot with some of the newer “PDW type” calibers, but chose to stay with the marketability of 9x19mm.  The CPW is now ready to move into production and they are working towards production now. The final version of the CPW; the Compact Personal Weapon. Note the translucent rear grip panel, which allows the operator to visually inspect the rounds in the translucent magazine, without removing the magazine. Felix Tsai, Senior Engineer on the CPW project, explains the disassembly process to Dan Shea. The CPW is a modular design, breaking down into distinct component groups. Felix Tsai explains the construction method used in the receiver and barrel of the CPW to Dan Shea, and then on to the cam recoil mitigation system that draws out the impulse – making for smooth firing – this is not just another straight blowback system.

CIS-40 AGL
ST Kinetics has two Automatic Grenade Launchers they are offering: the first is the CIS-40 AGL, and the second is a lightweight AGL that SADJ covered in the article available online from our last visit.  The CIS-40 AGL and MK2 product improvements are the focus of our visit, along with seeing the continued application of the Air Bursting Munitions programming systems.

Nan-Sang Chin, Principal Engineer on the AGL MK2 project, came in to explain the operation of the MK2 improvements. Nan-Sang Chin, Principal Engineer on the AGL MK2 project, explains the new improvements to the AGL. Here he discusses the quick change barrel and the interface to the bolt and feeding mechanism. This system has been somewhat simplified, and made very user friendly. It also allows the MK2 to break down into a smaller package for transport. ST Kinetics’ AGL MK2 broken down into its five basic component groups (the feed chute adapter at center is not a component, these change according to use): operating group, barrel, receiver group, top cover group, trigger group. CIS-40 GL
The CIS 40 GL is a standard break-open single shot 40x46mm grenade launcher.  On its stand-alone platform it has a buttstock attached to it.  If it’s going to be used as an under-barrel as shown on the SAR-21, it has a different mounting system.  It uses one folding (leaf) sight, graduated in 50mm increments.  It’s a very simple design, the barrel kicks open to the left at the back for loading almost any variety of ammunition, including gas and baton rounds.  The weight unloaded with the stock is 2.05 kilograms and the barrel length is 305 millimeters.  Overall length with the stock attached is 655 millimeters, and it has a 2.3 kilogram trigger pull.  It can be adapted to the SAR-21, the M16 and HK series weapons, and ST Kinetics says that they can adapt it to almost any other system.