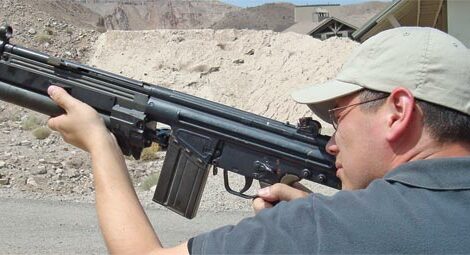 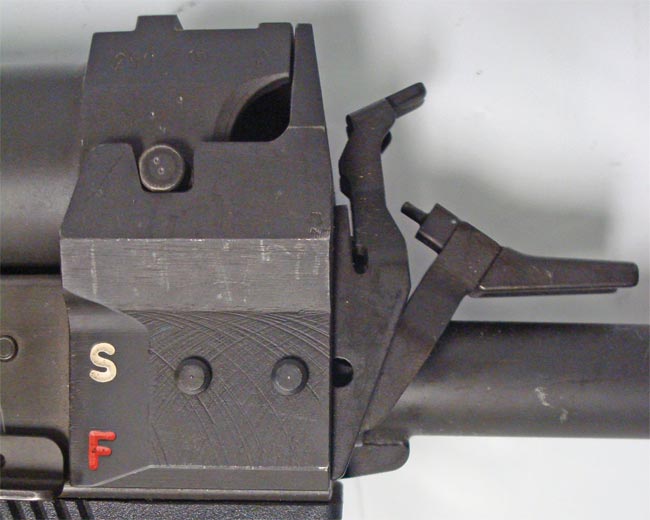 Close up of the HK69. In this photo, the hammer is cocked and ready to fire. To the left of the hammer, the barrel release mechanism can be seen.

The trigger for the HK79 system is located in an unusual, but convenient location.  Given the position of the shooter when firing the HK79, the trigger has been thoughtfully located on the left side of the receiver, just below the location of the G3 cocking handle.  When considering that a shooter’s natural hand position will be on the forward grip while aiming the 40mm system, the trigger’s location is convenient and practical.  Similar to the HK69, the HK79 trigger was crisp, light and responsive, if not unusual.  Due in part to the unusual location, and unlike most firearms which utilize the pointer or middle finger to engage the trigger, the HK79 is fired by the shooter depressing the trigger with the weak handed thumb.  As a single action only system, the trigger was as crisp as the HK69, but sufficiently different to prevent a direct comparison between the two systems.

Similar to the M203 system, the HK79 uses a quadrant leaf sight mounted to the right side of the weapon system. The sight is fairly typical for 40mm systems of the period, with graduated aiming points in 50-meter increments, out to 350 meters.

Operation of the HK79 Grenade Launcher
The fire control parts on the HK79 are not as intuitive as the HK69 fire controls.  To open the breech, the release mechanism is located at the bottom rear section of the weapon.  By pushing the latch forward, the barrel opens downward under spring tension.  Loading and unloading of the weapon is intuitive; similar to the HK69, semi-circle relief cuts within the breech are present to assist with loading and unloading of the weapon.

By supporting the foregrip of the weapon with the left hand, the shooter’s thumb should be near the push button trigger.  The HK79 utilizes a standard ladder type weapon sight.  Accurate range estimation, combined with choosing the correct cutout within the sight will result in accurate round placement.  As the test rifle and launcher did not have an assembled ladder sight, it was impossible to test the accuracy of the system.

Final Analysis
Practically, there is little room to manipulate the HK79 charging handle.  Detailed photos demonstrate the close proximity between the charging handle and the G3 magazine.  Loading and charging the HK79 under stressful conditions would be challenging, but not impossible.  More importantly, the combined weight of the HK79 and G3 combination is a hefty 13.4 pounds (6.1 kg) unloaded.  Nevertheless, the system was adopted worldwide by a number of countries, including Panama, New Zealand, and Norway.  From available Heckler and Koch advertising, it appears that the HK79 can be adapted to a wide variety of battle rifles, including the Steyr AUG, Colt M16, and British SA80. 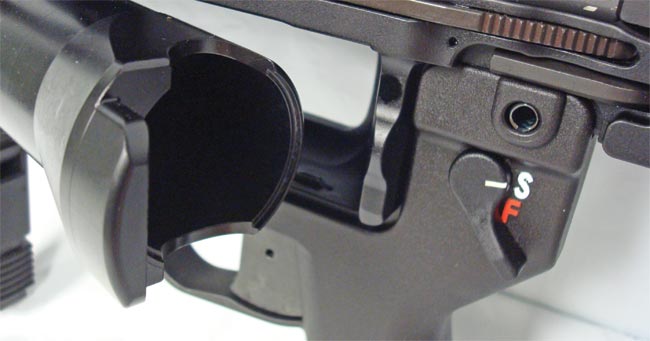 Close up of the HK M320 grenade launcher. In this image, the left pivoting barrel is clearly visible, along with the manual safety and release bar to dismount the weapon from a host battle rifle.

The H&K AG-C: a New Generation of 40mm Systems
Faced with improved engineering in the firearms industry, new manufacturing techniques and materials, and the need to replace an aging 40mm system resulted in the development of the Heckler and Koch AG-C.  Initially developed for the G36 battle rifle, the AG-C represents the third generation of Heckler and Koch 40mm grenade systems, and features the use of plastics and aluminum – a far cry from the original steel construction of the HK69 and HK79 models.

By allowing the barrel to open to the side, the AG-C system replaces the HK69 as a stand-alone weapon, yet also permits mounting the AG-C system on a rifle, thereby replacing the legacy HK79 weapon system.

As a stand-alone weapon, the AG-C is fully self contained.  The system utilizes an undersized pistol grip, a retractable stock and side mounted ladder sights graduated to 350 meters.  An electronic range finding sight is currently under development for future precision applications.  When used in the stand-alone configuration, the system appears to be a direct (and updated) replacement to the HK69.

Replacing the HK69 alone is not the most practical benefit of the AG-C.  By removing the retractable stock, the unit mounts directly to a battle rifle fitted with Mil-Std 1913 Picatinny rails.  As the sights are mounted off center, the ladder sights remain on the unit, eliminating the need to re-zero the system or mount new sights on the rifle.  In addition, because the barrel unlocks and opens to the left (rather than rotating vertically with prior legacy models) the system allows flexibility in selecting ammunition.  Like its predecessors, the ability to swing outward (rather than opening forward, as the M203) allows the weapon to chamber a greater range of long length 40mm rounds.  With the advent of newly designed medium range 40mm rounds, which are typically longer than the standard M433 High Explosive round, the ability to accept longer length rounds is beneficial to the end user.

Issued with the double action trigger, the trigger pull on the AG-C is long and heavy.  Compared to the HK69, the trigger on the AG-C is horrendous.  In fairness to Heckler and Koch engineers, the length and weight of the trigger pull are not likely to be noticed by users in stressful situations, and one may want to be absolutely certain the trigger is being engaged when firing high explosive rounds.  Nevertheless, there is no comparison between the trigger systems of the HK69 and the AG-C as the HK69 has a single stage trigger that is crisp and responsive, and is the better trigger by far.

Fitted with a rotating ambidextrous safety reminiscent of Heckler and Koch battle rifles, the AG-C looks and feels at home when mounted on an HK36 battle rifle.  Given the ability to mount directly to any rifle outfitted with Picatinny rails, the AG-C was a natural choice and has been adopted for use with the British L85A2, and the Canadian Diemaco C7A1 rifle.  When U.S. military trials were announced seeking a replacement for the M203 system, the AG-C was an automatic contender. 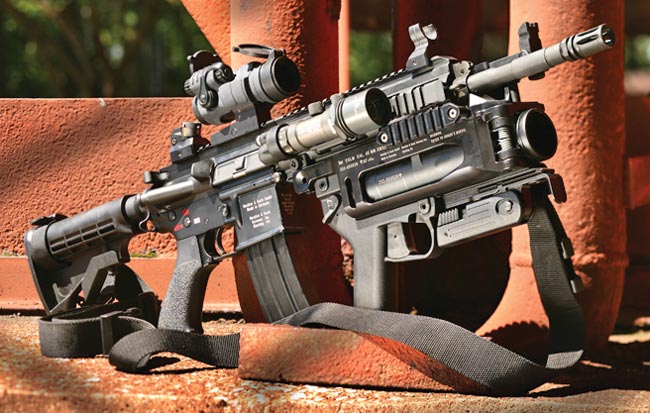 Operation of the AG-C and M320
Mechanically, the two weapons systems are virtually identical in the manual of arms.  The barrel release mechanism is located at the upper forward corner of the trigger guard.  By pushing upward on the release button, the barrel opens to the side under spring tension.  By reversing the internal components, the barrel can be made to open to either the left or right.

“…more reliable, more ergonomic, more accurate and safer than the M203 Grenade Launcher.  The GLM shall be capable of firing all current U.S. standard 40mm x 46mm low-velocity ammunition.  It must have a breach mechanism that is able to accept improved lethality munitions with longer payloads/projectiles than current 40X46mm munitions to accommodate system growth.  The GLM must initially mount on the M4 Modular Weapon System with a mounting architecture flexible enough for adaptation to the M16A2 and M16A4 rifle as well as future rifles/carbines.  The mounting hardware can differ for each host weapon; however, the basic launcher and sighting system must be able to mount to all host weapon variations with only minor modifications.  When removed and replaced, the module will return to its normal bore alignment regardless of the host weapon interface.”

In May 2005, an announcement was made regarding the selection of the Heckler and Koch system as the winner of an open competition to provide a new 40mm grenade launching system.  Designated the XM320, the system has been modified from the prior AG-C system to fit the needs of the U.S. Army.

Similar to the AG-C, the M320 weapon system can be used as a stand-alone system, or may be mounted to a battle rifle.  The M320 is a lighter system than the M203 it replaces, and does not require special mounting interfaces or hardware that the M203 requires.  Of course, the M203 was introduced in 1969, and is a nearly 40-year old system; the M320 is a modernized system that uses modern materials and manufacturing techniques to address the latest developments within the small arms industry.

According to Barbara Muldowney, U.S. Army deputy product manager for Individual Weapons (PEO-Soldier), the M320 provides a number of advantages over the currently fielded M203.  “Currently, with the 203, in order for the soldier to put the munitions in, they actually have to turn over the whole system,” she said.  “If it’s under an M4, for example, they have to make sure that it is upside down so that the breech is exposed.  Then they put the munition in and pull the pump in so that it closes.  With the XM320 they can always have their sight on the target while they put the munitions in, so they don’t have to take the two extra steps of inverting the weapon system and then turning it back over.”  Approximately 71,000 M203s are currently in military inventories, although only about half are currently in service.

Given the progression from the HK69 to the M320 over a period of nearly 40 years, it’s no wonder that the M320 is a thoroughly modern 40mm grenade system.  Nevertheless, when viewed through a historical lens, the features and attributes of the HK69 can clearly be seen throughout the lineage of Heckler and Koch grenade systems.  Absent an electronic solution, the decidedly low-tech ladder sight is still the most effective means of aiming at multiple distances.  The breech cuts originally found on the HK69 are still a proven feature of the M320 that has persevered through multiple design changes and modifications.

The engineers at Heckler and Koch have repeatedly proven to be insightful to the needs of military operators by producing highly capable weapon platforms.  If prior acts are an indication of future performance, expect the M320 to excel and provide many years of service to the U.S. Military.

Tags: 2010, 40mm, HECKLER & KOCH, HK 79 Grenade launcher, HK69, Jason Wong, M320, V2N1, Volume 2
← Are We Forever Stuck with the Bayonet?
Museum Satria Mandala // Jakarta, Indonesia →
Distributed at trade shows worldwide, Small Arms Defense Journal is a bimonthly publication that focuses on small arms, accessories, gear for the soldier, new products, industry news, and defense trade shows. The first issue of SADJ was Spring 2009, which launched at the LAAD show in Rio de Janeiro, Brazil. SADJ (pronounced “sage”) is targeted toward military, law enforcement, and defense industry professionals. Our job is to reach these groups and tailor content to their interests while producing a publication that is applicable to an international audience.