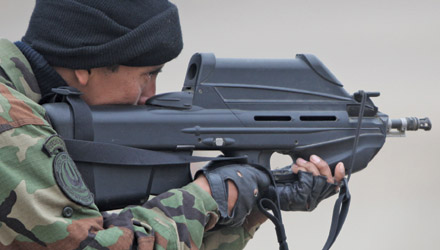 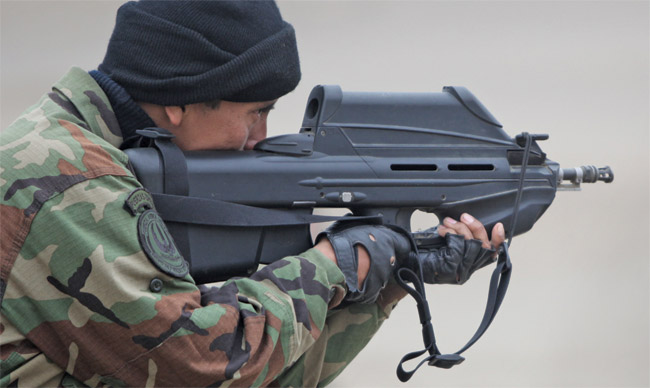 Combat experience in Afghanistan has prompted some rapid changes in the small arms carried by ISAF foot soldiers; and most especially by the U.S. Army, USMC and the British Army and Royal Marines.  The purpose of this article is to outline these changes, determine the lessons learned, and look ahead to examine the extent to which the growing variety of rifles including DMRs (Designated Marksman Rifles), carbines, IARs (Infantry Automatic Rifles) and LMGs (light machine guns) might be replaced in the future by a smaller number of weapons without losing any capability.

Developments to Date
Before the Afghan conflict began, it was assumed that most small-arms engagements would continue to take place within the traditional 300 meter limit, as they had in Iraq, and ISAF forces were equipped accordingly.  The rifles and LMGs carried by the infantry on foot patrols were overwhelmingly in the relatively short-range 5.56mm caliber, using the NATO standard SS109/M855 ammunition.  The U.S. forces used three principal weapons: the M16 rifle (favoured by the USMC), short-barrelled M4 Carbine (favoured by the U.S. Army because its compactness makes it more suitable for urban fighting, the typical scenario in Iraq) and the M249 development of the FN Minimi LMG.  Some long-range weapons in 7.62×51 NATO caliber, most notably the M240 GPMG (FN MAG variant) and also some sniper rifles and DMRs, were available for use in a support role when required.  The British patrols used the 5.56mm L85A2 rifle, L86A2 Light Support Weapon (effectively an IAR) and the L110 LMG (FN Minimi Para).  The L85A2 and L86A2 are the principal members of the SA80 family, which has had a controversial history.  As with the U.S. forces, the 7.62mm L7 GPMG (FN MAG) was available in support, and bolt-action 7.62mm sniper rifles were also in service.

These arrangements were thrown into disarray when faced with the very different circumstances of Afghanistan, where the Taliban noted the range limitation of the 5.56mm weapons and, wherever circumstances permitted, opted to engage ISAF troops from longer distances.  They could do this because as well as the ubiquitous but short-ranged AK family of assault rifles in 7.62×39 caliber, they have weapons chambered in the powerful Russian 7.62x54R round, equivalent in performance to the NATO 7.62×51.  The principal weapons using this cartridge are the lightweight PKM belt-fed LMG and the SVD semiautomatic sniper rifle.  Both the U.S. and British forces have reported that more than half of Taliban small-arms attacks are launched from ranges greater than 300 meters, out to as far as 900 meters.  While the 5.56mm NATO weapons were previously claimed to be effective out to 450-600 meters, experience has shown that their performance falls off sharply beyond 300m – or even less, when used in short-barrelled weapons.

The adoption by U.S. forces of replacements for the M855, in the form of the M855A1 EPR (U.S. Army) and MK318 Mod 0 (USMC), should resolve some other problems with the existing 5.56mm ammunition concerning erratic terminal effectiveness and poor barrier penetration.  However, these are unlikely to help the UK and other NATO nations whose lawyers tend to adopt a very literal interpretation of the Hague Convention prohibition of bullets “with a hard envelope which does not entirely cover the core” – which describes both of the new U.S. bullets.  In any case, no 5.56mm developments could achieve enough of an improvement to eliminate the need for a larger caliber to cover the longer small-arms ranges.

The immediate – and indeed, only immediately available – response of the U.S. and UK forces was to redistribute existing 7.62mm weapons to the foot patrols, despite their unsuitability in terms of weight (FN MAG) or low rate of fire (bolt-action sniper rifles).  The next stage was to launch urgent requirements for new 7.62mm weapons.  In machine guns, both the USA and UK have been developing lightened versions of the FN MAG and also adopting new lightweight MGs, comparable in weight and performance to the Taliban’s PKM.  The U.S. already has the MK48, the 7.62mm version of the FN Minimi which the British also selected in mid-2011. 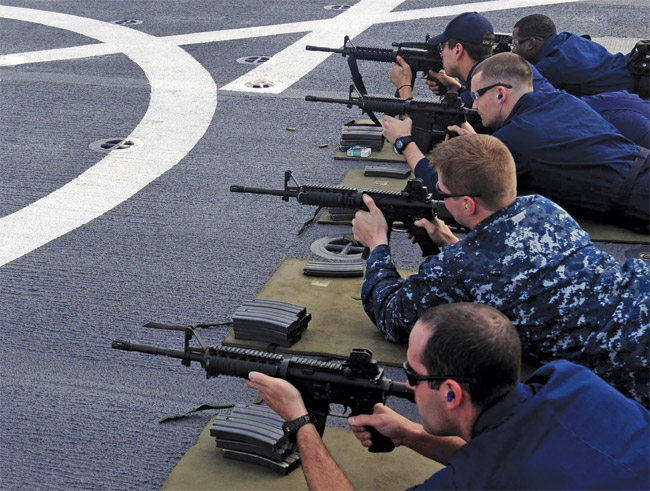 New rifles have been acquired; the U.S. had the advantage of already having selected the 7.62mm M110 SASS (Semi-Automatic Sniper System) and has also refurbished some 5,000 of the old 7.62mm M14 rifles as the M14 EBR (Enhanced Battle Rifle) with modern furniture and accessories.  These are proving very popular.  The British have acquired a limited quantity of a 7.62mm self-loading sharpshooter rifle from the USA, the L129A1, which is also very popular.  In contrast, the USMC has kept one eye on the needs of urban fighting and has rather controversially acquired a new, compact 5.56mm IAR to replace many of the M249s at section level; the HK 416-based M27.

The Case for Change
So we now have the following rifles and MGs in service or in prospect, all intended to be carried by dismounted soldiers on patrol: In the USA, the 5.56mm M4, M16, M27 and M249, plus the 7.62mm M14EBR, M110, MK48 and lightweight M240.  That’s a total of eight weapons, four in each caliber.  In addition they have heavier support weapons and bolt-action sniper rifles, plus Special Forces use the MK12 5.56mm and the MK17 (FN SCAR-H) 7.62mm rifles.

Such a variety of weapons has obvious disadvantages in complicating and increasing the cost of acquisition, logistics, maintenance and training.  Less obviously, there may also be penalties in combat.  Those troops armed with 7.62mm weapons will be penalised by the weight of the guns and particularly the ammunition (7.62mm cartridges weigh twice as much as 5.56mm), plus the much heavier recoil in rifles which slows down aimed semi-auto fire and makes automatic fire impractical.  The bigger and less wieldy weapons are also less suited to urban fighting.  On the other hand, those with 5.56mm weapons will be able to make little or no contribution to long-range engagements – not even in supplying their ammunition to other members of their section.  When combat ranges may fluctuate rapidly it is necessary to carry weapons in both calibres to cover the tactical demands but this reduces the potential firepower of a section in both short-range and long-range engagements.

The urgent need to plug gaps in weapon capability has made the current proliferation of firearms inevitable for the time being, but this situation raises an obvious issue: when planning the next generation of weapons, is it possible to provide a similar range of capabilities with a smaller number of guns, each effective at all normal small-arms ranges?

The key question is: what capabilities do we need from infantry rifles and portable MGs?  The answer to this will determine the characteristics of the ammunition, the guns and the weapon sights.  These characteristics will also be influenced by new developments in all three fields.

I suggest that the following capabilities should be sought in new small arms, beyond the obvious ones of reliability, robustness, reliability, good ergonomics, reliability, easy maintenance, reliability, ability to accept a wide range of accessories, and of course reliability in extended combat conditions:

I will now consider the three elements – ammunition, guns and sights – to examine the implications of these requirements.