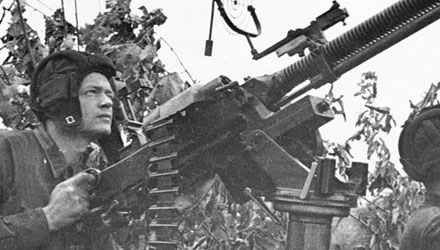 ‘Judgment Day’ – bi-annual vehicle and armament inspection in the T-55A unit of the Polish Army. Note the stripped DShKM on the table – and an indispensable hammer. You REALLY can’t disassemble the gun without one.

The Dushka also used optical sights of two variations.  One was the articulated telescopic sight for the T-40 / LB-62 armored car turret, the other was the M1938 panoramic (periscopic) sight, attached to the mount rails.  This latter was so elusive, that even the 1941 edition of the Soviet Dushka manual only mentions it in passage, with no illustration or any further data.  These were both brushed aside by the collimating (reflex) sight, used in tank mounts.  The reflex sight is what we now call an “open red dot sight,” but the Soviet ones did not use lasers and were rather the forefather of the heads-up display – they comprised an oblique glass plate, upon which an aiming ring is being projected by a light bulb from below.  The gunner aims with his both of his eyes open through the glass plate set at a 45° angle to his focal axis, placing a ring projected onto the glass at the target.  The WW2 sight, the K-8T (K for Kolimator, collimating sight, T for Tankoviy, tank use) was a HUGE box, almost the size of the SCR-536 walkie talkie radio.  Its successor, the K-10T, is much more compact, almost pocket-sized, as the light source has been changed from batteries to tritium-light.  (NB: Soviet K-10T sight has nothing in common with the USAAF aerial compensating sight K-10, used in WW2 bombers tail turrets – except for both being of the reflex type).

Licenses and Clones
The original M1938 Dushka was only manufactured in the USSR – all foreign production is the DShKM.  Some of these are still being manufactured at the time of this writing, and not only in the Third World.  It is still used by at least two NATO member-states, and one of them – Rumania – still manufactures and markets them!

Czechoslovakia/Czech Republic: The first licensee was Czechoslovakia, which bought manufacturing rights as early as 1951.  In 1953, a quadruple mount, called 12,7-mm protiletadlový čtyřkulomet vz. 53 (M1953 AA Quadruple MG) was created, clearly inspired by the U.S. M55 Quad-Fifty concept – but not the design itself, as the gun layer sat behind rather than between the machine gun banks.  These quads were manufactured by the Vsetin plant as of 1955 and used both in the Czechoslovakian People’s Army, and exported.  This was the first time that the M1938/46 shuttle-feed’s feed direction change feature could really be employed – as two guns fed from right, and two from left side.  The original 50-round belt boxes proved too heavy and cumbersome, so they were exchanged for 30-round cylindrical boxes, resembling the Kladov magazine of the early DK-31.  Also, the Rukavishnikov muzzle brake was found not effective enough for a quadruple mount, and it was quite early on replaced by the new design, with a much larger baffle and rectangular front plate doubling as reactive muzzle-brake.  These tell-tale squarish brakes are clearly visible in Bay of Pigs footage from Cuba, 1961 – but also in the recent Libyan rebellion, where it seems that some of the quad mounts were dismantled to provide more Dushkas for vehicular use – the TV footage clearly shows a right-fed Dushka with a rectangular muzzle brake and cylindrical belt box being mounted on at least one ‘technical.’  Nowadays the Czech Army still uses the DShKM, being one of the two NATO Dushka-using nations.  The Czechs have never bought the license for the NSV (those mounted on Czechoslovakian-built T-72s were imported from Poland), so after the Warsaw Pact disintegrated, they were left without their own HMG manufacturing capability.  Instead of importing them, they dusted off Dushkas left over from scrapped T-55s and use them everywhere the HMG is needed by the TO&A – with apparent success despite the horror-stories about their allegedly inherent lack of accuracy.  Even the Czech Special Forces operating in Iraq and later on in Afghanistan, used the Dushkas on top of their Land-Rover combat utility vehicles (including the 6×6 variety), on T-55 ring mounts complete with K-10T sight and active IR projector for night work.

The ubiquitous ‘technical’ truck of the recent Libyan civil war: a Toyota Hilux copy (Grand Iland Delux) with a Dushka on flat bed.

ChiCom/Pakistan: Another licensee was PRC, where the Dushka-M was manufactured as the Type 54 HMG.  Initially, these differed from the Soviet original only in having legend in Chinese characters on the feed cover, but gradually it was getting modified, mostly to reduce the weight, it seems.  The later model barrel is smooth, with no cooling fins cut, and much thinner in profile.  The Chinese M1938 mount’s cradle is made of much thinner steel gauge, strengthened with pressed ribs.  The Soviet cocking slide made of heavy-duty steel rod with a wooden ‘spade-handle’ was replaced by a slighter rod with bent handle, which happens to break out easily, judging from the photos.  The DShKM clones are still mounted on AFVs, despite more modern Chinese HMGs replacing the Dushka elsewhere.  In the early 1980s the modified Type 54 manufacture was transferred to Pakistan, where it is still manufactured and marketed by Pakistani Ordnance Factories.

Iran: The Iranian clone of the Chinese modified Type 54 is called the MGD-12.7.  The Iranians bought the license during the Iran-Iraq war, possibly also from the Chinese, as did the Pakistanis.  The ground troops use it on a light tripod bearing much likeness to the U.S. M3, and the belt box is said to take 70 rounds.  The gun is mostly used by armored troops, mounted on AFVs, but recent TV footage from the Ormuz Strait naval maneuvers shown many of these mounted on small naval craft as well.

Rumania: The Rumanians bought their license in the 1950s, when they were still closely following the Soviet path – from which they started to stray (towards more restrictive Stalinism) in the wake of the 1968 Prague Spring.  After the Ceausescu regime was toppled in 1989, free Rumania steered towards the West, and is now a NATO member and EU country – but their national defense industry’s giant Romtech is still manufacturing the Dushka.  Not only that, but they even made a thorough redesign of it in 2005, called DŞK UM, fitted with a quick-change barrel, new style multi-baffle muzzle-brake and chambered for the .50 BMG fed from M9 links.

Poland: Soldiers of the Polish Army in the East were first issued Dushkas during WW2, fighting alongside the Red Army.  After WW2 drew to a close, the M1938 Dushkas remained with the ground forces, mounted on AFVs and universal tripods.  These were all WW2-vintage, as Poland did not start its own license-manufacturing immediately after the war.  Then, as 14.5-mm twin and quadruple Vladimirov guns replaced the Dushkas in infantry, these were transferred to the tanks.  At the beginning of the 1970s the situation radically changed after license-manufacturing of the T-55 tank started and many new HMGs were needed.  The DShKM manufacturing started at the Tarnow Mechanical Plant in 1972, and continued until mid-1980s, when it was replaced on the line by the NSV, needed for the new T-72s.  Machine guns alone were first manufactured, with only a limited number of M1938 Universal Mounts made in 1978.  It might appear a bit strange to start manufacturing an obsolescent machine gun when it’s successor was already introduced into the inventory, but at that time it was the only solution available.  First, it was uncommon for the Soviets to sell licenses for their most-modern stuff.  Second, this WW2 gun was simple to manufacture and the aerial defense machine guns were needed right away.  In 1972 even the Soviets were only beginning to de-bug their new HMG, first guns were actually issued in 1976, when Polish Dushkas were already four years in production, with thousands delivered to Polish and other Warsaw Pact tank manufacturers. M1938 DShK HMG on M1938 Universal Mount in AA trim, fitted with M1943 AA Sight, with Polish troops on a shooting range in the early 1950s. The inverted ammunition belt rendered (somewhat) martial looks, while ensured safety – no rounds could have possibly been stripped from it.

Dushka Rules!
The end of WW2 did not mean peace for the Dushka.  Quite the contrary: hardly any of post-WW2 local conflicts was fought without her participation.  At first, she was mostly defending the Communist cause, starting with Korea, where it was used by both North Koreans and ‘people’s volunteers’ from China.  Then it was Vietnam, when Dushkas, both Soviet and Chinese, were employed by NVA and Vietcong to counter the ubiquitous Hueys – with deadly effectiveness despite the accuracy issue.  During the Six-Day War and the Yom Kippur War, Dushkas were employed by all Arab states against Israel.  Czech quadruple Dushkas fired at the Cuban-emigrant piloted black B-26s supporting the Bay of Pigs invasion in April, 1961.  Once again, they were employed by Cuban ‘workers and students’ against USMC CH-46s landing on Grenada, during Operation Urgent Fury in 1983.

Sometimes the Dushkas fought on both sides of the front.  The first such encounter was of course in 1968, when the Chinese clashed with the Soviets in a territorial dispute, but the first internationally covered one was in 1971.  Then, in an Indo-Pakistani war that brought about separation of Eastern Pakistan, now known as Bangladesh, the Indian Soviet-built T-54s with DShKMs fought Pakistani Chinese-built Type 59 tanks with their Type 54 ChiCom-manufactured Dushkas.  Another such encounter was in Afghanistan: the Soviet Army still had Dushkas on their older tanks sent south of Amu-Daria, while mujahedeen’s used their Charlie Wilson-supplied Israeli-captured ones, soon reinforced with Pakistani-manufactured Type 54 HMGs.  With time, and after Iran started to export their Dushkas, she became a truly international weapon, finally becoming a “Usual Suspect” throughout the world, like Kalashnikov, ‘Hip’ helicopter or T-55 tank.  Every imaginable (and several not so much) political or military force in the world used the Dushka, all over the globe – in Africa, Asia, even Western Europe (when PIRA fired a Libyan-supplied Dushka on the British post in Ulster), also by terrorists and ordinary bandits, like in Somalia, Sudan or Liberia, where the basic mobile firepower source became a ‘technical truck,’ modern equivalent of the Soviet revolution ‘tachanka’ (a horse-drawn galloping carriage typically with a Maxim machine gun).  The recent Dushka’s heyday was the Libyan Rebellion when people overturned the Kaddafi regime.

This seemingly archaic, obsolete weapon, now mostly seen in museums and private collections, is still serving on, with no expiry date in the foreseeable future.  Simple, and needing no high-tech background to master, it is cheap and plentiful, from second-hand or brand-new, still being manufactured – it still seems to have a future before herself.