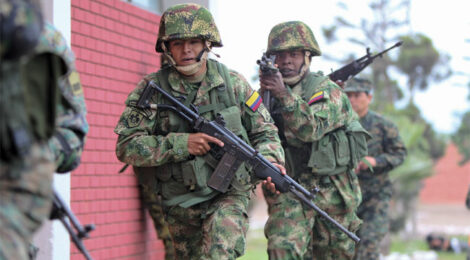 Do We Need a New Service Rifle Cartridge? 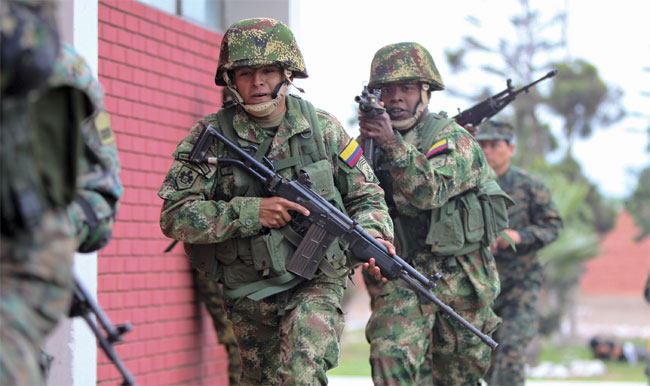 8.  The very latest new assault rifle platforms (Beretta ARX-160, Czech Republic CZ 805 A, Taiwan T97 and SCAR Common Receiver) exist after the costs of millions in R&D and are caliber- convertible by the operator beyond just 5.56x45mm NATO.

9.  USSOCOM and FN are developing a single, “Common” or universal SCAR rifle receiver that can be converted into other calibers to include 7.62x51mm NATO, medium-calibers (6.8x43mm Rem. SPC and 7.62x39mm Russian) and 5.56x45mm NATO.

10.  The U.S. Army and U.S. Navy continue to pull from Anniston Army Depot and the NSWC in Crane, Indiana and then modify and field additional mothballed 7.62x51mm NATO M14 rifles to be fielded to front line units as Squad Designated Marksman’s Rifles (SDMRs) to better deal with long range and protected targets not defeated by current 5.56x45mm platforms.

11.  The Canadian military is open to and investigating the merits of a new caliber and/or projectile in their ongoing SARP (Small Arms Replacement Program) effort for the future Canadian DoD family of small arms to be fielded through 2022.

12.  Many experienced law enforcement snipers/counter snipers no longer employ 5.56x45mm/.223 Remington caliber sniper rifles even though they can employ superior non-Hague compliant expanding hollow-point, polytip-style projectiles because this cartridge is simply not considered an effective “one-shot man-stopper”.  (The author personally knows of one such failure that resulted in the tragic death of an Arlington County Virginia SWAT officer killed when the assailant killed him with a shotgun after being drilled dead center mass in the torso with a 55 grain M193 FMJ 5.56x45mm round at less than 100 yards.)

13.  A June 2009 report compiled for elements of the Canadian DoD concluded that to enhance their ammunition effectiveness it must “abandon the C77 FMJ (SS109-style) cartridge and replace it with a round loaded with a SOST/TOTM projectile,” or field a 6.8x43mm Rem. SPC round or a 7.62x51mm platform as a third option.

15.  The U.S. Army has left caliber or projectile style open in the requirements for the pending new “Individual Carbine” full and open competition and is investigating/modeling other projectiles and calibers in support of this and other new Army small arms initiatives.

16.  The 2006 U.S. Joint Service Wound Ballistics Integrated Product Team (JSWB-IPT) report recommended, and data developed from more than 10,000 test shots from 3–300 meters, to include those taken with M855, MK262 MOD 1, 6.8x43mm Rem. SPC, 7.62x39mm and 7.62x51mm NATO, supported the conclusion that in terms of terminal performance the optimum caliber for assault rifle use was not 5.56x45mm NATO nor the M855/SS109-style projectile.  In fact, the 331 page draft (interim) report dated 12 April 2006 stated, “The best performing systems emphasizing tissue damage, on the average, in this study were of larger caliber than 5.56mm” and, “The 6.8mm performance observed in this test suggests that an intermediate caliber is the answer to the trade-off balance issue.”  The report goes on to state that, “The 6.8 mm projectile had a near optimum balance of MASS, VELOCITY, and CONFIGURATION to maintain its effectiveness, even at lower impact velocity.”  “The clear and unequivocal best performing cartridge in the JSWB-IPT was 6.8mm” which was also validated by the 11 August 2006 USMC Test Evaluation Report for the Alternate, Phase I.  Ironically, these statements and recommendations from the expert panel were omitted from the final U.S. Army report.

17.  The 5th Special Forces Group (Airborne) with concurrence from U.S. Army Special Forces Command (Airborne) leadership developed the 6.8x43mm Remington Special Purpose Cartridge and MURG (Modular Upper Receiver Group) concept to enhance the terminal effectiveness of 5.56x45mm carbine platforms (MK12 SPR, M4A1 Carbine, MK18 CQBR) to deal with combat failures of short-barreled 5.56x45mm weapons in common use today.  Documented accounts of enemy personnel being hit as many as 15 times with M855 drove the 5th SFG (A) to take action to address these ammunition failures.  One well known and documented example of these M855 failures is provided by MSG Anthony Pryor – 5th SFG (ABN) – Silver Star recipient – Afghanistan mountains – 23 January 2002.  “…Pryor snapped his gun around and shot the terrorist at point blank range with two rounds of 5.56.  “The man crumpled.  So I went left to right, indexed down and shot those (two more) guys.”  “What he thought were their corpses sagged lifelessly to the floor.  “I realized that I was halfway through my magazine, so I started to change magazines.  Then I felt something behind me, and thought it was one of my teammates…”  The blow came suddenly.  With stunning power.”  He heard a noise, looked over and saw the ghostly apparition of the two men he had shot clamber back to their feet, fumbling for their weapons.

Or the account of U.S. Army SFC Bill Bennett, briefed to the U.S. Congress in November of 2007, a Special Forces medic who was killed by an insurgent in Iraq after that individual was shot 7-9 times in the torso.  The same bad guy then gets up and comes over a wall and reengages the other team members, gets shot another 6-8 times from about 20-30 yards and is finally killed by SFC Bennett’s fellow team member SSG Springer who shoots and finally kills him with a M1911 .45 ACP.

These are just a few of the documented accounts on this subject.  One need not go too far to find other examples, though there are those who seemingly would prefer not to explore the known short comings of the 5.56x45mm cartridge for political or competing commercial or economic reasons, maybe as a result of entrenched institutional resistance to change or maybe they are operating under the flawed concept of “good enough.”  Combat equipment should never be just good enough.  Failures of 5.56x45mm round in combat are not new nor are they a unique occurrence in the current long range war in Afghanistan.  They have been occurring for years at even CQB ranges throughout the theater of operations we are engaged in at the cost of brave U.S. and foreign friendly war fighters.

19.  The U.S. Army PM-MAS (Product Manager – Maneuver Ammunition Systems) and ARL (Army Research Laboratory) developed the M855A1 EPR (Enhanced Performance Round) with a non-SS109-style projectile to increase the terminal performance and penetration of the standard issue 5.56x45mm cartridge from short-barreled M4 carbines based on failure reports from U.S. troops in combat and confirmed in a 2006 Lethality Study conducted by the U.S. Army.

20.  In the December 2006, CNA “Soldier Perspectives on Small Arms in Combat” survey commissioned by the U.S. Army (PM Soldier Weapons) of 2600 OIF/OEF combat troops stated on Page 29:  “Twenty-six percent of M9 users requested higher caliber ammunition and increased stopping power.  M4 and M16 users echoed this recommendation.  When speaking to experts and soldiers on site, many commented on the limited ability to effectively stop targets, saying that those personnel targets who were shot multiple times were still able to continue pursuit.  M249 users also expressed a desire for increased ammunition caliber, but to a much lesser degree than other weapon users.  Twenty percent of M9 users called for a replacement.  20% of M4 users Recommend larger caliber bullet and increase stoppage – lethality”

21.  The South Korean Army is fielding this year the K11 – a 20mm shoulder-fired multi-shot air-bursting grenade launcher with a maximum effective range of 500 meters (the maximum range for a point target for even accomplished Marine Corps riflemen armed with the 20 inch barrel 5.56x45mm M16A2/A4).  How long will it be before this unique technology is in the hands of unfriendly states?  (South Korea is actively offering the K11 for export sale now and has reportedly already delivered some K11s to a “friendly” Middle Eastern nation).  The stand-off range of their new K11 individual weapon matches that of our issue M16 rifle (500 meters) and exceeds that of the Army’s pure-fleeted 14.5 inch barreled M4 carbine (460 meters).  As an air-bursting grenade launcher it does not rely solely on well-placed single rifle or machine gun rounds from a trained marksman while under combat stress to induce casualties on the enemy.

22.  During the 2010 NDIA Joint Armaments Conference in Dallas then MARCOSYSCOM Commanding General BG Brogan spoke about the need to conduct a “Trade Study to compare new projectile technology in other than 5.56mm and 7.62mm” rounds for the next USMC service rifle.

23.  Last year USMC 4-star General James N. Mattis, nominated for CENTCOM Commander at the time of writing, emailed his 3 and 2-star command CGs about his serious concerns over the failures of USMC-issue 5.56x45mm rounds in combat with USMC troops (after a visit to Walter Reed Hospital and hearing accounts of multiple 5.56x45mm failures that resulted in friendly casualties with USMC Lt. David Borden who, “lost a leg to a suicide bomber when he and other Marines emptied a magazine (5.56x45mm) into the man charging them, at close range.”.  GEN Mattis wrote in his email about his/the “USMC interest in shifting to a higher caliber assault rifle,” and “Physics say that the best advances in bullet technology will not give us the increased stopping power/energy in the 5.56, since any improved 5.56mm ammunition could only be more effective if adopted in a 6.8mm or other heavier round.”

2. The capability of the current issue M995, Mk262 Mod1 and M855 could be improved upon by substituting a “purpose-built projectile” — a projectile whose terminal ballistics are less affected by intervening barriers than current service rifle ammunition, thus providing a more consistent capability for our Marines.

3. Improved performance could be realized through the development of a cartridge with a caliber other than 5.56mm.

4. If an alternate cartridge is identified, the “purpose-built projectile” technology could be developed in the caliber of that cartridge, thus merging these two efforts and realizing an optimal ammunition.

1.3 Recommendations:
1. Commencement of phase II is recommended.  The objectives of phase II would be:

a. Expeditious pursuit of an improved purpose-built projectile for the 5.56mm NATO cartridge that is “blind to barriers”, i.e. a projectile whose terminal ballistics are not affected by intervening barriers.

b. Continued study to determine the optimal cartridge size that satisfies current requirements and to aid in the development of future requirements.”