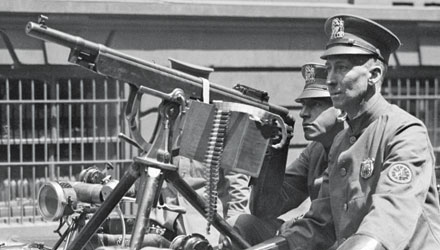 Preparing for a warm welcome, these Americans residing in England in 1940 have organized a mechanized defense corps to protect their families and homes in Britain in the event of invasion by German troops. The men are drilling with Colt Automatic Guns Model 1914 purchased at their own expense.

The U.S. Army did become interested in the Colt Model 1895 because of the Navy’s successful use in the Spanish-American War and purchased about 100 guns for testing and training purposes.  The Army could not use the Navy’s guns because the Navy used the 6mm Lee while the Army used the .30-40 Krag.  A joint Army-Navy board met in 1898 and recommended standardizing arms and ammunition for the Army, Navy and Marine Corps.  As a result of this recommendation, the Navy rechambered their 6mm Lee’s to the .30-40 Krag, then to the .30-03 and finally to the Springfield .30-06.  However, it is important to note that though the Army, Navy and Marine Corps used the Colt Model 1895, only the Navy officially adopted the weapon, designating them Mark I (6mm Lee), Mark I-Modification I (.30-40 Krag, .30-30 and Springfield .30-06) and Mark III (for the Model 1914 with the interchangeable barrel in .30-06).  The Army just purchased them “off the shelf.”  The first automatic weapons officially adopted by the U.S. Army were the Colt Maxim Model of 1904 and the Automatic Machine Rifle Model of 1909 (commonly called the Benét-Mercié).

The Colt Sees Plenty of Action
The Colt company sold the Model 1895 for commercial sales as a military weapon and ultimately sold approximately 25,000 guns world wide.  Besides the United States; Russia, Belgium, Canada, Britain, Central and South American countries as well as most of the European countries purchased the Colt 1895.  Attesting to the versatility of the gun, it was chambered in such diverse rounds as the 6mm Lee, .30-40 Krag, 7.65mm Mauser, 6.5mm Greek, 7mm Mexican, 7.62mm Russian, .30-06 Springfield and the .303 British, among others.

During the Boer War in South Africa (1899-1902), Canadians in service with the British Army used several Colt Model 1895s against the Boers.  In 1900, in mainland China during the so-called Boxer Rebellion, the Boxer insurgents laid siege to the Foreign Legations for 55 days in Peking.  Their defense was left in the hands of the small numbers of Marine Guards of the various nations.  The United States Marines were equipped with two Colt 1895s and used them so effectively that they were credited with saving the Foreign Legation from annihilation.  USMC Sergeant Major Daniel Daly, who was awarded his second Medal of Honor at Belleau Wood in World War One, and is credited with the quote “Come on, you sons of bitches, do you want to live forever,” was a machine gunner and was awarded his first Medal of Honor for his actions in the Boxer Rebellion, using the Colt 1895.  During the Mexican Revolution (1911-1916) all sides used the Colt 1895: the Mexican Federales, the Mexican Revolutionaries and U.S. troops under General “Blackjack” Pershing in skirmishes across the border with the Mexican Army.  Prior to World War I, the U.S. Navy and the Marine Corps were able to put the Colt 1895 to a lot of use because of their involvement in the Philippine Pacification campaign and peace keeping efforts in Central America and the Caribbean.

In 1914, Colt modified the Model 1895 by replacing the heavy, thick permanent barrel, which had a tendency to overheat and cause “cook-offs,” with a finned barrel that is easily changeable.  The Colt Model 1895 with this upgrade modification is called the Colt Automatic Gun Model 1914. 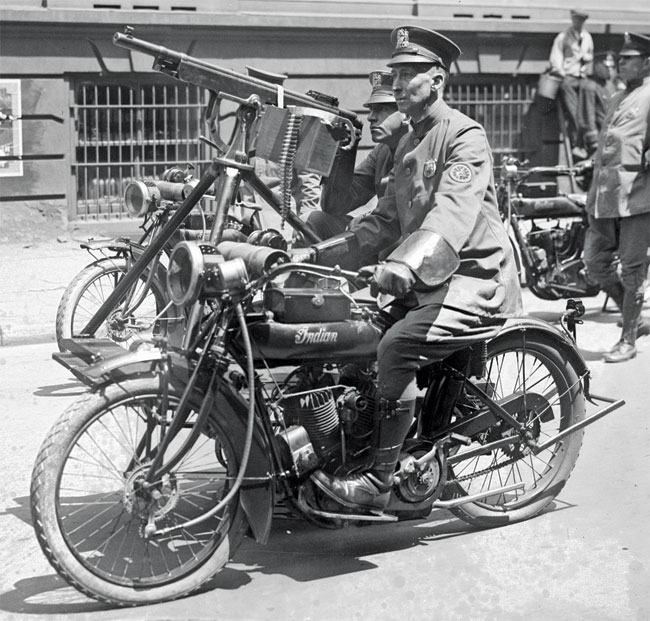 By the time of World War I (1914-1918), the old Colt was pretty much obsolete, but the Models of 1895 and 1914 were still used by Britain, Canada, Belgium and Russia through the end of 1915 until ultimately replaced by the likes of the water-cooled Vickers and Maxim and the Lewis guns.  The United States continued to use the Colt for training purposes.

The Colt Model 1895 weighs 35 pounds and its tripod, with saddle and yoke, weighs about 60 pounds depending on which tripod is used.  The gun’s overall length is 41 inches with a barrel length of 28 inches.  It is air cooled and fed by a 250 round cloth belt from the left side from a wood ammunition box that attaches directly to a mounting bracket on the saddle mount.  The rate of fire is a very comfortable 400-450 rounds per minute and while fully automatic only in operation, with its moderate rate of fire, single shots were more than capable in the hands of an experienced gunner.

Operation
Operating the Colt Model 1895/1914 is simple and straight forward.  Attach the wood ammunition box in the firing position on the left side of the saddle mount.  Push the brass-tipped cloth belt from the left through the opening above the box and draw it through as far as it will go.  Let go of the belt.  Manually swing the gas lever downward and back to the rear until it strikes the bottom plate of the gun and release the gas lever.  It will now return forward to its normal forward position.  The gun is now ready to fire.  Pull back on the trigger and the gun will fire until the trigger is released or until all the cartridges in the belt are expended.  To hold the gun ready for firing, push the safety latch on the right side of the gun below the rear sight from “fire” to “safe.”

Field Stripping
To field strip the weapon, remove the belt from the gun and throw the gas lever to the rear checking the chamber to be sure it is clear and release it to return to its normal forward position.  This action cocks the hammer.  On the right hand side of the gun, in front of the trigger, is the handle lock, which is a pin with a small projecting lever resting in a horizontal position.  Turn the lever upward and backward as far as possible.  Withdraw the handle lock.  This releases the handle, which can then be removed rearward.  The handle contains the mainspring, hammer, sear, sear spring, trigger and trigger spring.  To remove the hammer and mainspring from the handle, pull back the trigger and pull the nose of the sear down.  USE EXTREME CAUTION as the compressed mainspring and hammer will literally fly out the handle unless it is controlled by your hand.