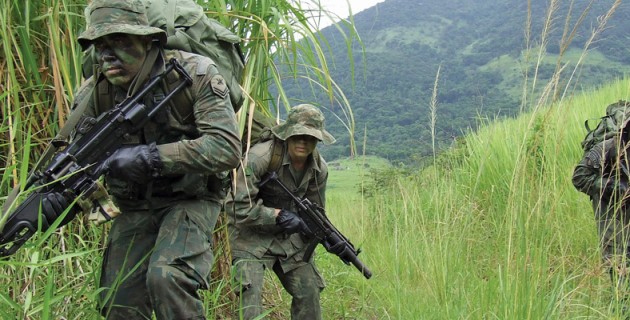 ABOVE: Troopers from 2a Companhia de Ações de Comandos in a patrol exercise, the point man carrying a 5.56x45mm FN Minimi Para light machine gun and the second one a suppressed 9x19mm H&K MP5SD6 submachine gun. The jungle hat is a trademark of the Tonelero SpecOps Battalion.

As Latin America’s largest country and with a population of 200 million souls, Brazil faces massive defense problems.  Although it does not have to cope with any imminent threat from overseas or any of the ten bordering nations, properly watching and defending 8.5 million square kilometers of land territory and an unbroken coastline of just about 7,500 kilometers long (corresponding to 3.5 million square kilometers of territorial waters) requires substantial effort from the three independent military services, the Exército Brasileiro (Army), the Força Aérea Brasileira (Air Force), and the Marinha do Brasil (Navy).  This last branch, in addition to the expected operation of patrol vessels, warships and submarines, also possesses an air arm (the Força Aeronaval) equipped with both fixed- and rotary-wing aircraft and boasts having and operating the Southern Hemisphere’s sole aircraft carrier, the 33,000 ton A12 São Paulo, the former French Navy Foch, acquired in 2000.  The Navy also has a very effective Marine Corps, the Corpo de Fuzileiros Navais (CFN), now 205 years old.

Its historical origins are traced back to March 7, 1808, when the Portuguese Royal Family was fleeing from an invasion of Portugal by French troops under Napoleon and landed in Rio de Janeiro, thus transferring to its Brazilian colony the seat of the entire Portuguese Kingdom.  The royalty was specifically escorted in that historic trip by members of Portugal’s Brigada Real da Marinha (Navy Royal Brigade), who are considered as the original nucleus of today’s CFN.  Actual combat actions took place in the following year, when Portugal’s Prince Regent Dom João formally declared war on France as a retaliation and ordered the invasion of French Guiana, north of Brazil.  A joint force of 700 ground troops crossing the border from Pará State was joined by a small, three-ship (two Portuguese, one supporting British vessel) naval force from Rio de Janeiro.  From the sea, a landing force consisting mainly of sailor-soldiers from the Brigada Real da Marinha attacked the capital city, Caiena, which fell in January, 1809.  This has, then, been considered the historical baptism of fire of what would become Brazil’s Corpo de Fuzileiros Navais. Along the two centuries of its life, the Brazilian Marine Corps has received several names, such as Corpo de Artilharia da Marinha (Navy Artillery Corps), Batalhão Naval (Naval Battalion), and, since 1932, Corpo de Fuzileiros Navais.  During WWII, the Marines were given the task of establishing a Destacamento (Detachment) at the small Trindade Island, the easternmost Brazilian territory located in the South Atlantic 1,160 kilometers from the coast.  The idea was to prevent it from being transformed into a base for German U-boats; at the time pretty active in torpedoing and sinking Brazilian and Allied shipping in that region.  Also during the war, a number of Companhias Regionais (Regional Companies) were established along the Brazilian coastline – these later becoming larger Grupamentos de Fuzileiros Navais (Marine Groups).  However, it was only in the 1950s that the CFN began to structure itself to become a real amphibious landing force, gradually acquiring the necessary material and specialized training, those coming mainly from the United States.  Along the five subsequent decades, the Brazilian Marine Corps has evolved into an effective, albeit relatively small, force fully capable of meeting not only local defense requirements, but also able to answer basic international commitments. The British-made 7.62x51mm Parker-Hale M85 bolt-action rifle is the basic sniper weapon of the Brazilian Marines.

The first official assignment abroad took place in 1965 when Brazilian Marines participated in the Inter-American Peace Force that was sent to the Dominican Republic by the Organization of American States to stabilize that Caribbean nation after a pro-Communist revolt broke out in April.  In the same year, a United Nations Peace Mission Force in charge of supervising border disputes between India and Pakistan had CFN members acting there.  Thirty years later, in 1995, Brazilian marines were once again sent overseas at U.N. service, this time as members of UNAVEM, the United Nations Angola Verification Mission.  Subsequent activities on behalf of the U.N. took them to such countries as El Salvador, Bosnia, Honduras, Mozambique, Rwanda, Peru, and Ecuador.  Following a 2004 decision, Brazilian forces (Army and Marine Corps) have actively been participating in the MINUSTAH, a multi-nation, 7,000-people strong U.N. Stabilization Force in Haiti, and this includes the general command of the force. A Marine armed with a 12-ga. Mossberg 590 shotgun kicks open a door for the rest of his assault team to enter. In a world of high-tech weapons, low-tech (but highly lethal) gear is still in use, as shown by this Brazilian Marine Commando practicing sentinel-suppressing… with a machete.

Subordinated to Brazilian Navy’s CON – Comando de Operações Navais (Naval Operations Command) comes the FFE – Força de Fuzileiros da Esquadra (Fleet Marine Force), established in 1957 and directly in charge of the operational aspects.  Under its command is the DivAnf – Divisão Anfíbia (Amphibious Division), under which jurisdiction are three Batalhões de Infantaria de Fuzileiros Navais (Marine Infantry Battalions), the 1 BtlInfFuzNav (Batalhão Riachuelo), the 2 BtlInfFuzNav (Batalhão Humaitá), and the 3 BtlInfFuzNav (Paissandu).  Current individual armament is the 9x19mm Taurus PT92AF pistol (being complemented by the newer PT24/7G2) and the 5.56x45mm Colt M16A2 rifle, mobile fire support being provided by 7.62x51mm FN MAG machine gun and the lighter 5.56x45mm FN Minimi, while the 12.7x99mm (.50 cal.) Browning M2HB is still around for heavier duties.  Heavier fire support for the infantry is provided by 60mm (Brandt M-60) and 81mm (M29A1) mortars, while anti-armor defense rests with Swedish-made AT-4 launchers (range 300 meters) and RBS 56 BILL missiles (range 2,200 meters).  The first pre-series batch of Brazilian-made Mectron MSS 1.2 AC anti-tank missiles was delivered to the marines late in 2012.  This state-of-the-art weapon system is laser-guided and has an effective range of 3,000 meters.  The Taurus MT-9A 9x19mm submachine gun is generally used by marine police units and in second-line guard duties.  The 7.62x51mm FAL rifle remains in limited use for guard use.

Also subordinated to the FFE is the crack BtlOpEspFuzNav – Batalhão de Operações Especiais de Fuzileiros Navais (Marine Special Operations Battalion), generally called the Tonelero Battalion after a battle fought in 1851 by members of Brazilian Navy’s Batalhão Naval, ancestor of the CFN, in a war against Uruguay and Argentina.  At present, this unit consists of a Companhia de Comando e Serviço (Command and Services Company) and three Companhias de Operações Especiais (Special Operations Companies).  1a. CiaOpEsp specializes in recon actions, 2a. CiaOpEsp focuses on commando-type activities and 3a. CiaOpEsp (also called the GERR, or Grupo Especial de Retomada e Resgate), whose specialty is hostage rescue and re-taking of special objectives.  Basic Tonelero armament is the Colt M4 carbine and the FN Minimi Para light machine gun, supplemented by such more specialized types such as the Heckler & Koch MP5SD suppressed submachine gun, the same manufacturer’s MP5KA4 stockless model, the IMI Mini-Uzi SMG (all of these in 9x19mm), and the 12-ga Mossberg Model 590 shotgun.  The British-made Parker-Hale M85 7.62×51 bolt-action sniper rifle is now being replaced by the similarly-chambered French-made PGM Ultima Ratio bolt-action rifle, while anti-materiel duties are carried out by the .50 cal PGM Hecate II.  Close range fire support is provided by 60mm Commando mortars. Crew of a 120mm mortar of the Batalhão de Artilharia (Artillery Battalion) in position to fire it. The weapons are Israeli-made Soltam K-6/A3 models, being towable by light vehicles and easily carried under-slung by helicopters.

In the Amazon region, the Brazilian marines count on a specialized Batalhão de Operações Ribeirinhas (Riverine Operations Battalion) based in Manaus, but this is under the direct supervision of the Navy’s 9th Naval District, and thus, under CON – Comando de Operações Navais. The Engineering Battalion includes a platoon in charge of proving Chemical/Bacteriological/Nuclear/Radiological actions in the battlefield, and some of its personnel are seen here conducting a casualty-removal exercise. It should be pointed out that the camouflage pattern of their protective clothing is different from the standard Brazilian Marines model.

Also under the general control of the Força de Fuzileiros da Esquadra comes the TrRef – Tropa de Reforço (Reinforcement Troop), whose mission is to provide combat support elements, including such units as the BtlLogFuzNav – Batalhão Logístico de Fuzileiros Navais (Logistics Battalion), the BtlEngFuzNav – Batalhão de Engenharia de Fuzileiros Navais (Engineering Battalion), and the BtlVtrAnf – Batalhão de Viaturas Anfíbias (Amphibious Vehicles Battalion), equipped with U.S.-made AAVP7 tracked vehicles in different configurations, all of its fleet being in the process of communications and armament upgrading.

It should be emphasized that the marines do have a full amphibious operational capability, as the Marinha do Brasil (Brazilian Navy) is adequately equipped with specialized ships.  These include three LSTs: the 6,700-ton G25 Almirante Saboia (ex- RFA Sir Bedivere), the 8,750-ton G28 Mattoso Maia (ex-USS Cayuga) and the 8,750-ton G29 Garcia D’Avila (ex- RFA Sir Galahad) – and an LSD, the 12,150-ton G30 Ceará (ex-USS Hermitage), this being able to carry and launch AAVP7 tracked amphibious vehicles as well as personnel and vehicle landing craft.