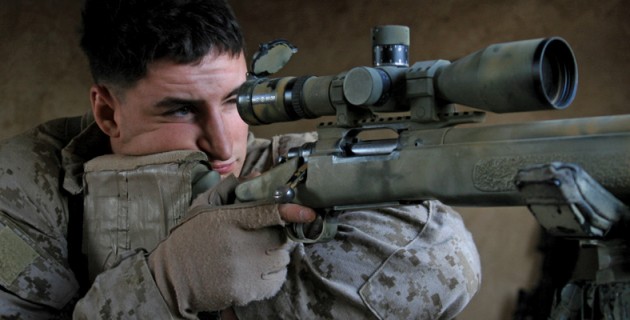 October 2011, MCB Quantico, VA. Over in the ‘ammo shed’ that’s a safe distance from the rest of PWS in Harlee Hall, ammunition technician Jeff Thacker, former USAF Senior Master Sergeant and now a government civilian employee, uses a digital micrometer to measure the length of a 7.62mm cartridge that he’s just hand loaded. Each round is checked this way after seating the projectile with a lever operated bullet press. This is the final one of 22 steps that are meticulously taken in custom loading these and thousands of other specialized cartridges each year for the USMC’s Rifle and Pistol Teams. Thacker told us that ammunition for each one of team’s match rifles has its own special ‘recipe’ that can be adjusted as needed. (Robert Bruce)

SADJ:  What will you do with the skills you’re learning?

Johnston:  I’m going to stick around in the Marine Corps until I retire.  After that, I haven’t put much of a mind to it.  I’d like to employ them afterwards, either personally as a hobby or actually get out into the firearms industry somewhere.

SADJ:  You haven’t burned out on guns yet?

Johnston:  No, I enjoy them and this definitely renewed my desire to work with them.  Once I’ve done my three years at Quantico I’d like to get back out to the West coast; Camp Pendleton or Twentynine Palms or even Bridgeport.  Get out there and work on some of the fleet guns.

Johnston:  My family and I really like Quantico.  Like I said, I grew up hunting and fishing and that’s all available right here on base.  And there’s time to do that.  After PT we change over and start production or go to school about zero-eight (0800 hours) and leave at 1630.  Not such grueling hours as out in the fleet and we get to spend some time with family.  A nice change after six years.  Quantico is a pretty cool place to be, I enjoy it, all the outdoor things that I can take my kids to and teach ‘em the same things I did growing up.  And there’s so much history around the place it’s just amazing.  Going up to see Washington, DC too.

SADJ:  What would you like to say to young persons considering joining the USMC or currently-serving Marine 2111s about why they should strive to attend PWRC?

Not every 2111 can make it through the 2112 course.  They have to have the intelligence and the drive to actually come here and do it.  There’s a lot of attention to detail and you truly have to love working with these weapons or it will just become mundane and you’ll hate what you’re doing.

Part of the reason this place is so enjoyable to work is because everybody seems to be cut from the same mold.  I haven’t been anywhere where there have been so many hunters, fishermen and outdoors type folks.  It wouldn’t be fair to say everybody’s that way but that tends to be the type of folks who come out here.  And they’re all intelligent and that makes it that much better.  You don’t have a lot of that immature crap that comes with a lot of school type environments.

SADJ:  What have we missed asking that is important or what comments would you like to add?

Johnson:  The thing that sticks out in my mind is the comment Sergeant Major (David K.) Devaney made a few months ago.  He said that Master Guns Hoffart had the rifle section pumpin’ out M40s that were going straight over to Afghanistan.  And the Sergeant Major had gotten a body count of confirmed kills.  Those new guns had gone out there and ‘gotten some.’  A real motivator when you’re actually building stuff that’s getting in the hands of Marines who are doin’ the job.

MACHINE SHOP
The PWS Machine Shop is unique in the fact that it is the only one in the Marine Corps where MOS 2161 Machinists operate/utilize CNC (computer numerically controlled) machines for production and R&D work.  Combining the most advanced CAD/CAM (computer aided design/machining) with CNC machines all but eliminates the need for outside assistance in weapons and parts development.

The Machine Shop is where every Precision Weapons Repair Course student starts his or her career at PWS.  The basics of machining and fabrication are a must for those who wish to become 2112’s.  For the first few months they are instructed by Machinists (MOS 2161) in the use of lathes, mills, and other power tools not commonly used by 2111’s.

NATIONAL MATCH M16
National Match (NM) M16 Section is responsible for the entire life cycle maintenance of all the NM M16 rifles used by Post and Station Teams for participation in the Competition-In-Arms Program (CIAP).  This includes approximately 300 rifles throughout the Marine Corps that must be kept in peak operating condition at all times.

M45 CQB PISTOL SECTION
Certain specialized units including Reconnaissance Battalions, MARSOC and Marine Expeditionary Units (Special Operations Capable), have a general requirement for a backup sidearm with greater lethality than that of the M9 9mm.  The answer to this requirement is the MEU (SOC) .45 cal Pistol, recently designated M45 Close Quarters Battle Pistol.  An M1911A1 at heart, the M45 CQBP takes all brand new components and puts them on an existing M1911A1 frame.  The result is a reliable, durable pistol chambered in .45 ACP, which meets the demands of specialized users.  M45 Pistols are produced under DMISA contract.

NATIONAL MATCH M1911
National Match M1911 Section is responsible for the entire life cycle maintenance of all the NM M1911 Pistols used by Post and Station Teams for participation in the Competition-In-Arms Program (CIAP).  This includes approximately 300 pistols throughout the Marine Corps that must be kept in peak operating condition at all times.

RIFLE TEAM SUPPORT
The Marine Corps Rifle Team is world renowned for their marksmanship skill, and in order to showcase that skill the competitive shooters need the absolute finest equipment available.  There are two 2112s that are responsible for supporting the Marine Corps active and reserve rifle teams.  That support consists of building, testing, and maintaining all the rifles used by the team, including National Match M16s, National Match M14s, Model 40Xs and Palma Rifles.  Also, Rifle Team Armorers provide onsite support at all the various matches the team competes in throughout the year.

The Rifle Team Armorers have the most latitude when it comes to trying out new products, and when they find something that proves effective, that item will often find its way onto all of the competition weapons in the Marine Corps inventory.  Often these items, or some variation of them, eventually find their way onto combat weapons.  It is for this very reason that the Rifle Team Section is usually the first step in the R&D process.

PISTOL TEAM SUPPORT
Like the Rifle Team, the Pistol Team competes at the highest level of the sport, and to be competitive they need the most accurate pistols available.  Currently, the team competes primarily with National Match M9’s and National Match M1911s, all of which are built and maintained by the Marines of PWS.  This is not a section for students, however, and also like the Rifle Team, only 2112s who have already demonstrated their proficiency will be assigned to the Pistol Team.

In order for a pistol to meet the demands of the Marine Corps Pistol Team, it has to pass an accuracy test just like the rifles made at PWS.  The only difference is that the pistols are tested at 50 yards as opposed to 300, but they still have to be able to hold a group of three inches around or less.

The 2112s who support the Pistol Team have to demonstrate a tireless work ethic because of the highly demanding maintenance schedule.  It is their selfless devotion to their job which enables the team to constantly perform at a high level during the many matches they attend throughout the year.  Their schedule somewhat resembles that of the rifle team armorers as they support the Marine Corps active and reserve pistol teams.

AMMUNTION SECTION
As a whole, Ammunition Section is responsible for conducting R&D of new ammunition components and loading techniques, assisting in the test and evaluation of all factory and hand loaded ammunition used in PWS weapons systems and working with Federal agencies (FBI, State Department and DEA) in R&D of new ammunition.

TEST FACILITY
The testing of all the weapons built at PWS is a vital step in the production process, as is the proof and function firing they must undergo as well.  Every single weapon leaving PWS must complete this process to ensure that the operating forces are provided with the finest weapons possible, since Marines whose lives are on the line depend on these weapons every day.  Each weapon is first checked and then rechecked for safety and quality control before ever going to the Twitchell Test Facility.  Once there, they are put into a machine rest for stability and tested for accuracy.  Each weapon must shoot at least 3 groups of 1 MOA (3 inches at 300 yards) or less to receive a passing mark.  With the combination of the precision weapons and the hand loaded ammunition produced by PWS, the weapons routinely perform far better than the minimum standard.

SUPPLY
Because of the unique mission of PWS, there are unique supply requirements to accomplish that mission.  These call for PWS to have a dedicated Supply Section just to meet them.  Supply Section consists of four Marines – three for supply administration and one for warehousing duties.  Their entire job is to meet the production demands of all the different sections of PWS.

Note:  Weapons Training Battalion’s consolidated Armory is co-located in Harlee Hall but it is not a PWS activity.

PRECISION WEAPONS REPAIR COURSE
PWRC provides Marine Corps Armorers with the basic knowledge and skills required to produce and maintain precision weapons in support of the Marine Corps.  Graduates are awarded MOS 2112 and are highly skilled in duties that include operating machine shop equipment, fabrication of special tools and production/maintenance of Sniper Rifles, Enhanced Marksman Rifles, M45 Pistols, and all Match Conditioned weapons used for the Competition in Arms Program.