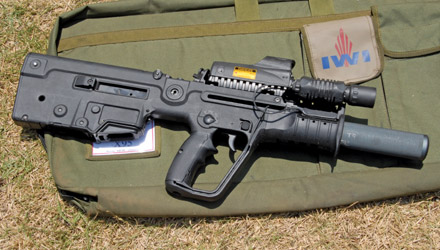 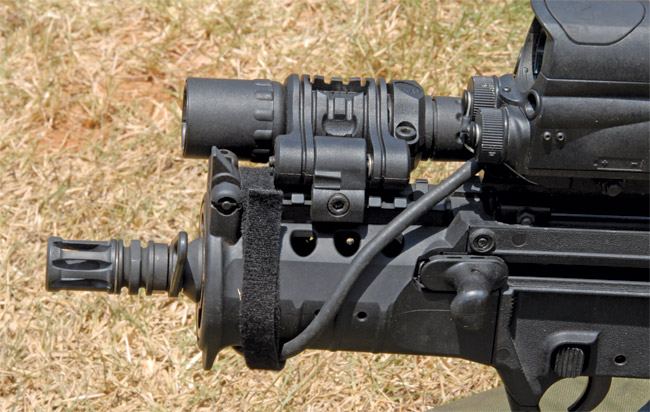 Just behind the slot where the charging handle travels, there is a round hole showing a slot to operate a latch.  A unit armourer, with a simple tool, can disengage the latch and remove a damaged barrel in minutes.

On the upper part there is another portion of Picatinny rail where the primary sight system is locked.  The X95 is normally delivered with the Mepro MOR reflex sight that allows having a red dot sight and a visible/IR laser target pointer (the equivalent of a M68 CQB sight and of the AN/PEQ2) in one compact unit.  Lasers can be activated by another PTT button, with its cable placed at operator convenience and strapped to the weapon with another Velcro ribbon.

At the rear end of the main Picatinny rail there are the rear flip up backup sights, integral to the polymer body and built in the same material.  Those sights are battle zeroed at 300 meters from the factory and are intended to be used only in case of failure of the primary optronic sighting system.

Behind the backup sights there is a polymer proprietary mount, designed to accept several accessories: the Meprolight MX3, a 3x magnifying riflescope to extend the range of shooting of an infantryman, the Mepro GLS, the Tritium reflex sight for the 40mm grenade launcher (not used on the X95 but on the GTAR-21 rifle), and the Mepro Minimon-I, a II Gen monocular light intensification night vision device compatible with the daylight reflex sight.

IDF prefers to use II Gen NVD, instead of III Gen, because their battlefields are more often urban areas, where there is some degree of artificial illumination, than open rural areas, where night vision must rely only on stellar light.

The trigger guard is very wide, protecting the hand of the operator and allowing him to use it to distribute the weight of the weapon in a more comfortable way than traditional assault rifles.  The weight and mass balance of the X95, together with the compact size and central position of the pistol grip, allows an operator to shoot even in full auto the weapon holding it with only one hand, as in the case of shooting around a corner without exposing the rest of the body or the head to enemy fire.  The trigger guard can be replaced, on request, with a more traditional one, more suited for operators wearing scuba gloves, such as Shayetet 13 IDF Navy commando units.

Just above the trigger, reachable by the shooter’s index finger, is the ambidextrous magazine release button.  The location of this button demands a long rod to transmit the movement to the mag catch, since the magazine well in the bullpup configuration is in the rear portion of the stock and not immediately near to the release button as in traditional rifles.

Immediately to the rear of the trigger guard, easily operated by the shooter’s thumb, is the ambidextrous safety/fire selector with three positions: “S” for safety, “R” for semiautomatic fire (it stands for “Repetition” taken from the FN FAL British nomenclature) and “A” for full auto. 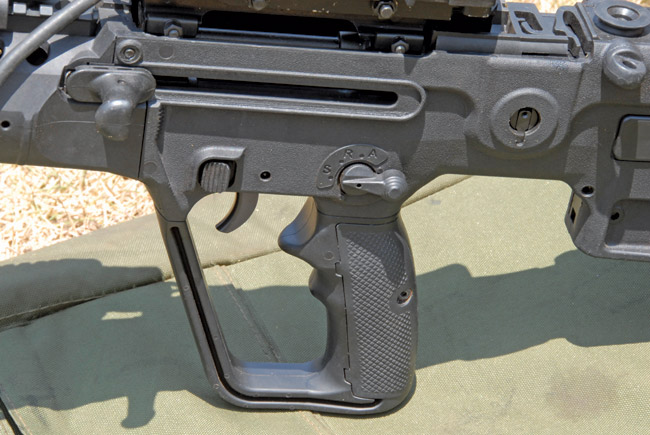 At the bottom of the stock is the magazine well and, behind it, a big hidden button to operate the hold open: when a fresh magazine is inserted, the shooter can press the button with the thumb of the same hand and the bolt will be released, closing the rifle action and chambering a unfired cartridge.

The buttstock is covered with a rubber pad, to help the shooter to keep the rifle on the shoulder and to absorb the recoil.

All the X95s, and the TAR-21s rifles, are designed to keep essential maintenance as fast and simple as possible, keeping the logistic at field unit level.  Only in a few malfunction cases will the rifle be sent to a superior level of maintenance.

The X95 magazines are the usual 30-round M16 magazines, STANAG 4179.  This has been done to maintain compatibility with the existing logistic chain.  Changing magazines while in battle, for soldiers used to the M16, could be a little bit awkward and slower, but this is a common problem for all the bullpup configuration rifles and can be improved only with training.

Since the TAR-21 rifles have been started to be deployed in IDF combat units, recruits are no longer trained with the M16s, but directly with the new rifles, to avoid problem with manipulation under the stressful conditions of the battlefield, when only muscular memory of movements repeated hundreds of times when performing training drills will drive the soldier to make the right thing in the right moment.

Field stripping the X95 is really easy.  After magazine removal and the safety checks to ensure that the carbine is clear with no round chambered, just put the rifle with the muzzle down and have the rubber buttstock in front of your eyes.  Push the upper pin at the end of the stock out and open the rubber buttstock like a lid.  The buttstock cavity will now be accessible.  With two fingers pick the polymer pad, where the recoil spring and the recoil spring rod are attached, and pull it out.  Done.

Basically, the X95, and all the TAR-21 rifles and carbines, after field stripping are divided into only two subassemblies: the rifle and the bolt group.  That’s all the soldier is requested to deal with.  No more pins or small parts that can be lost and make the weapon inoperable.

The X95 can be produced also as a 9×19 caliber SMG.  This is the case, for example, of the X95 silenced version, with integral silencer that does not need subsonic ammunitions but uses the ordinary 9 Parabellum ammunition.  But in case the mission profile needs it, the 5.56 carbine can be converted into a blowback SMG that shoots from closed bolt position.  The kit includes the barrel, the bolt, an insert that will fit the X95 standard M16 magazine well and, of course, 32-round Uzi magazines for the 9mm ammunitions. 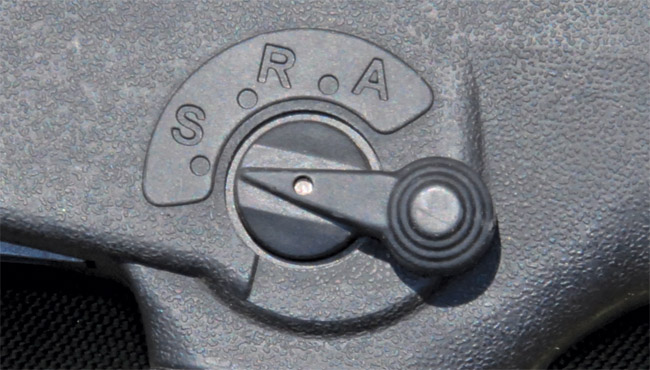 The 9mm Parabellum barrel has no gas port and is the same length but has a different rifling twist: 1:10” 4 RH grooves, specific for the 9mm heavier bullets.

The bolt group has no rotating bolt.  The bolt, with its extractor and ejector, is integral to the bolt carrier body and machined into it.

The purpose of the 9mm conversion is not only to use a different cartridge when the mission profile requires it, but also to use less expensive ammunitions for training purposes maintaining the same ergonomics.

The X95, in the IWI and Israel Defence Forces, is the next generation of Special Forces assault rifle that combines its compact size and light weight keeping the same ballistics of much longer military selective fire carbines.

It has been designed and developed with the close collaboration of IDF Special Forces, but it can offer a good use potential for all those military/police forces that need for some reason a flexible, modular and compact carbine that can be switched into a pistol caliber SMG.

Battlefield reports, during IDF “Cast Lead” operation in late 2008, have been quite promising, showing that the X95 and the TAR-21 weapon family have a very good reliability record and can stand the ruggedness of real combat.