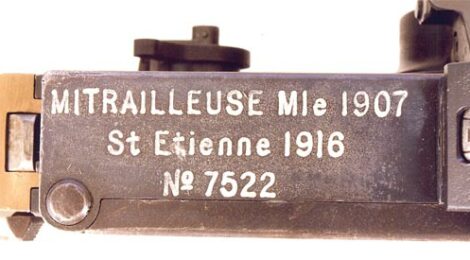 Markings along top of receiver box. The models 1907 and 1907T were collectively known as just Model 1907. This gun has the “T” modifications.

Additionally, in 1916 it was recognized that in certain circumstances a greater sustained fire capability was needed and a 300 round canvas belt was introduced in May of that year.  Packed in the Model 1916 ammunition box, it differed from the rigid strip box in that it opened from the large flat side like the armorers box rather than from the top, had no partitions, and the belt was accordion folded with the bullet tips facing down.  It could also be packed in a feed strip box with the partitions removed and fed out through the top.  The early belts had a brass starter tab and was later replaced with a leather starter tab.  Belts were not generally used in infantry applications but were for fortress and anti-aircraft defense situations. 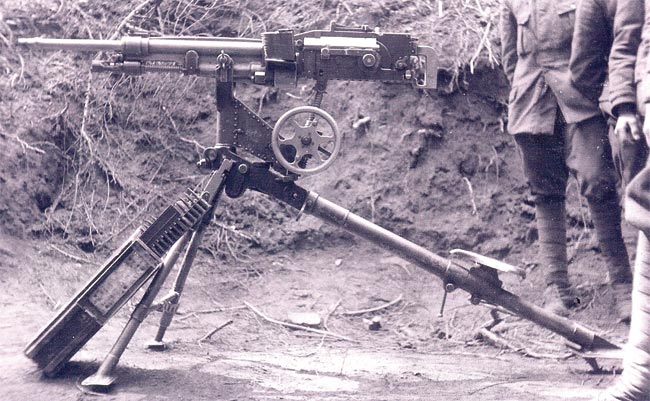 Rare photo of the unmodified M1907 captured by the Germans with the leaf rear sight, standard front sight and no large gas regulator. Note also that the ammunition box shows a Puteaux M1905 feed strip that also worked in the M1907. (Photo courtesy of Thierry Jousson collection)

The Model 1907 Omnibus tripod was again modified by reducing the weight of some of the parts and some minor changes to the elevating system and became the Tripod Model 1915 Omnibus weighing in at 54 pounds.  This tripod could accommodate both the Hotchkiss M1914 and the St. Etienne M1907T though an adaptor was needed to be fitted to the elevation screw for the Hotchkiss.  There were two fortification mounts manufactured as well.  The Fortification Mount Model 1907 would accommodate just the M1907 and M1907T.  The Fortification Mount Model 1907 (Omnibus) could accommodate M1907, M1907T and Hotchkiss M1900 guns.  A distinctive feature of all the tripods, the Model 1907C, Model 1907 Omnibus and Model 1915 Omnibus was a large elevation wheel.

The M1907 fired from an open bolt position.  To fire the gun, insert a loaded feed strip into the feed strip housing on the left side of the gun and engage the first cartridge with the feed sprocket wheel.  Cock the gun by pulling the cocking lever to the rear engaging the bolt to the trigger sear.  Return the cocking lever to the forward position.  A cartridge has now been withdrawn from the feed strip and placed on the feed ramp that is tilted upward.  When the trigger is pulled, the sear releases the bolt that travels forward, feeding the cartridge on the feed ramp up and into the chamber.  When the bolt is in battery, the cartridge will fire.  As the bolt travels rearward it extracts the fired cartridge ejecting it forcefully to the right rear and simultaneously extracts another cartridge from the feed strip positioning it on the feed ramp ready for when the bolt moves forward again.  Extreme care must be observed when bringing the gun out of action particularly when a partially loaded feed strip is in the weapon.  There is a feed sprocket wheel release button that disengages the feed sprocket wheel to allow the withdrawal of a partially loaded feed strip.  This does not mean that the weapon is clear.  A cartridge can still be in position on the feed ramp and if the trigger is pulled allowing the bolt to travel forward, it will chamber and fire the remaining round.

Despite all its faults and peculiarities the M1907 did work and the French government added it to their arsenal for service at home and in their African colonies.  When World War I broke out the M1907 quickly succumbed to the rigors of the Western Front.  But the French were desperate for machine guns and the M1907 and M1907T saw wide service throughout the war.  To augment their machine gun inventory, the Hotchkiss M1914 was also introduced into service and, being a better weapon, ultimately replaced the M1907T in front line service late in the war.  The M1907T, though primarily used by the French, was also used by Italy when it changed sides in 1915 and by Greece.  While U.S. troops were trained to use the Hotchkiss M1914 in 1917, they too had occasion to use the M1907T as an anti-aircraft defensive weapon at airfields, ports, cities and other key installations.

The French Saint-Etienne Model 1907 and M1907T was designed and built during a time when machine gun development was in its infancy.  New ideas, innovations and technologies were a fertile field for inventors and only by ultimate trial would a design prove to be effective in terms of production, dependability and field operations.  Unfortunately, the St. Etienne suffered from so many faults (numerous and complexity of parts, a Rube Goldberg operating system, inefficient cooling, foreign material fouling, etc.) that it was doomed to a relatively short operational career as a primary weapon.  Yet even by 1940 the old M1907T could be found in anti-aircraft and second line of defense positions but could hardly stand up against its enemy counterpart the German MG34.  Nevertheless, it is a noteworthy design that highlights the faults, and the lessons learned from those faults, that enabled future designs to progress toward the efficient modern machine gun of today.  As a collectors item, St. Etiennes are extremely rare in the United States with only a small handful on the registry.

REMOVING THE BOLT:
1) Raise top cover latch and open the breech housing door located on the right side of the receiver.
2) Pull back on the cocking lever and retract the bolt to the rear until it engages the trigger sear. Insert a pin punch through the holes in the radiator casing just forward of the trunnion.
3) While holding the cocking lever to the rear with the left hand, grasp the bolt assembly with the right hand and pull out. Slowly return the cocking handle forward until the heel of the operating rod rests on the pin punch.

REMOVING THE LIFTER:
1) Push the lifter down to its lower position, grab it between the thumb and index finger of the right hand and pull it towards oneself while raising it simultaneously.

REMOVING THE RACK:
1) Grasp the rack and pull it straight out to the right disengaging from the operating rod.

REMOVING THE COCKING LEVER AND GEAR:
1) Grasp the cocking lever with the left hand raising it slightly.
2) With the right hand, press the exterior tenon of the cocking lever pawl so as to disengage the nose of the pawl out of the groove in the gear.
3) Turn cocking lever all the way to the rear and pull out to the left.
4) The gear and cam follower is free and can be removed from its housing by pulling out to the right after positioning the end of the roller against the bottom of the receiver.

REASSEMBLY:
Reassembly occurs in the reverse order from that used for disassembling taking note that the assembly mark on the rack coincides with the mark on the pinion gear.

(I would like to thank Dr. Jean-Francois Legendre for his invaluable assistance in providing key information and in translating portions of the manual on disassembly procedures.)

Tags: 2010, M1905, M1907, M1907T, Robert G. Segel, V2N2, Volume 2
← The Sounds of Silence: Part 4
SADJ Visits ST Kinetics →
Distributed at trade shows worldwide, Small Arms Defense Journal is a bimonthly publication that focuses on small arms, accessories, gear for the soldier, new products, industry news, and defense trade shows. The first issue of SADJ was Spring 2009, which launched at the LAAD show in Rio de Janeiro, Brazil. SADJ (pronounced “sage”) is targeted toward military, law enforcement, and defense industry professionals. Our job is to reach these groups and tailor content to their interests while producing a publication that is applicable to an international audience.