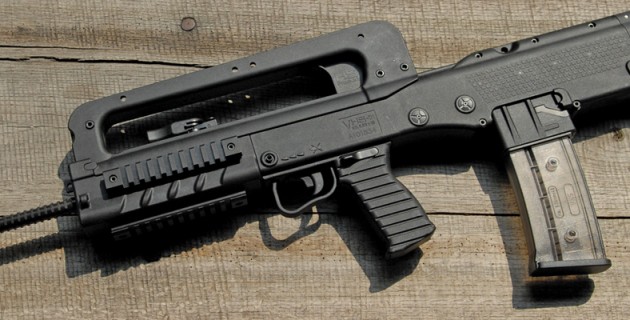 The 2007 VHS-D rifle, photographed at the Eurosatory 2008 trade fair in Paris – note the STANAG 4179-compatible magazine, sliding grenade guide on the barrel with early muzzle-brake compensator and the grenade sight slung under the carry handle directly over the cocking handle. (Photo courtesy of Remigiusz Wilk, REMOV)

The mechanical sights are installed in the carrying handle, which means that the sight-radius is only 280 mm (11 inches) and this weapon would be better shot with some kind of a red dot or outright optical sight.  There are two models of carrying handles, fully exchangeable: the older without integral 1913 rail (these can be bolted to the outsides of the handle’s central trough), and the new model, with integral 1913 rail.  The older handle has a FA MAS style ghost ring peep with two flip-over covers, where actual peep-sights are situated, one for 100-200 and the other 300-400 meters.  This whole sight is set on the micrometer screw for vertical adjustment for zeroing, with adjustment scale on the rear of the sight casing and carry handle.  The front sight is a thin, fin-like blade set in a front-sight carrier, adjustable for windage also with a micrometer thread. An integrated rail model has got no integrated mechanical sights, only rail-mounted BUIS.  The factory-offered set is very HK-ish, resembling the ones used on HK UMP and HK G36C, with flip-over peep sight both height and windage adjustable, with solid monobloc plastic front sight blade set inside a sturdy tubular front-sight protector.

The non-rail carry handle is peppered with holes enabling fitting various accessories, the grenade launching sight, side mounting rails (no rail is fitted inside the trough, as that would obscure the sight picture), etc.  Additional rails can be fitted to a ventilated polymer hand-guard, with three sets of 1913-rail bolting interfaces.  The hand-guard is attached with lugs on the front and a cross-bolt through the lower receiver on the rear.  The whole hand-guard can be replaced with a special 40mm under-barrel single-shot grenade-launcher module.

The pistol grip is quite comfortable (even though it does not look like that at all at a first glance), and has an oiler compartment inside closed with a hinged lid – another French connection.  On the left side of the grip there is a bolt hold-open release lever, situated and operated just like one usually found on a pistol.

The rotating bolt head has usual 7 locking lugs, with a fin on the extractor mocking the eighth one.  The extractor is of the usual design, and so is the spring-loaded ejector inside the breech-face.  The whole bolt assembly is impaled on a long firing pin without return spring, held captive by a cross-bolt at the rear of the bolt-carrier.  The bolt-head is being rotated by a cam-pin, sliding inside the cam cut into the bolt-carrier’s side.  Whoever have seen an AR-15 bolt disassembled, would not find anything surprising in the VHS bolt mechanism.

While shooting VHS, you better keep your elbow low – rising elbow plus short sleeves equals inviting trouble with hot brass, burning elbow bend area. Also, look at the direction of ejection – heaven forbid having to fire that weapon from a left shoulder. How did a liability like that slip through the military acceptance?

Safety-Selector Failure
The safety-selector lever of the VHS is patterned after the FA MAS, but unfortunately it is much worse than the original.  Why would Marko Vuković, the VHS designer, and a soldier with front-line experience, twice wounded during the War of Independence have opted for such a monstrosity, remains a riddle wrapped up in an enigma.  Whatever other solutions were available to him, would have surely worked better – all the earlier prototypes had a side-lever safety-selector.  The series-manufactured VHS has a safety-selector inside the trigger guard, a scythe-shaped crank set on a vertical axis in front of the trigger.  On “Safe” the lever is set in a longitudinal axis of the rifle, blocking access to the trigger.  Now, usually if designer puts his safety inside the trigger guard, it is meant to make the shooter’s life easier – you just put your finger inside the trigger guard and flip the safety forward (Garand), sideways (SVT or FA MAS) or rearward (SKS) and that’s it – now press the trigger: bang.  Not so easy with the VHS, folks.  I mean it’s easy to move the safety off the trigger when you enter it into the trigger guard.  Yeah – but NOTHING would change!  The gun would not fire unless the selector lever is fully rotated through an astonishing 160 degrees from initial point.  No one has fingers long enough to just sweep it through – that would take two extra joints going backwards to achieve.  Now rotate it back by 10 degrees, and you’re back in the muck – that’s enough to block the trigger again.  And, taking into consideration that this is right hand-only firearm, so you’re inserting the finger from the right, rotating it all the way to the left would put the rifle into fully-automatic mode – a decision of dubious tactical virtue.

To put it into semiautomatic mode would now necessitate a full 320 degrees rotation to the right.  Now that’s a world record in anti-ergonomics, if there ever was one.  The original French lever only goes through 90 degrees either way and has spring-loaded click-catches to assist the fire-mode selection.

One-Sided Ambidexterity
All ye southpaws (left handed people) better forget about shooting the VHS.  Contrary to FA MAS, this receiver has only got one ejection opening, on the right, and empties are thrown to the rear, sharply.  So sharp, in fact, that if you as much as raise your right elbow firing the VHS-K, the hot brass will bounce off it, right into your elbow cavity.  Heaven forbid having to fire it from the left shoulder, or this brass would remodel your face for sure.

Also the bolt hold-open release, very nicely fitting under the right thumb is completely out of reach if you grasp the grip with your left palm.

Ironically enough, the cocking handle is ambidextrous, though, and on two counts at that: not only it is placed centrally, under the carry handle, but also it has a G36 reminiscent flexible lever, spring-loaded to point forward, but easily bent to either side.  Contrary to G36, though, the cocking handle is separate, and remains stationary during firing.  Also, the magazine release is ambidextrous, a flapper lever behind the magazine well, rotating around the vertical axle.

Magazines
The 2008 Eurosatory-presented prototypes were taking the STANAG 4179 (AR-15) -compatible magazines.  Shortly thereafter the Croatian military, which has much more G36s than M4s of whatever description, demanded that the military rifle be compatible with the HK G36 magazine rather than the STANAG.  Thus Croatia has joined the German-magazine club within the Alliance, along with Czech CZ805.

Disassembly
The disassembly is easy and intuitive: clear the weapon and make doubly sure the chamber is empty, then withdraw and save the rear cross-bolt.  To remove the rear-plate one has to pull it down until the hook on the inside of the rear-plate disengages from the buttress inside the receiver comb (that is ca. 5 mm) and separate from the rifle.  Now place your palm at the rear opening of the receiver and on pulling the cocking handle the entire reciprocating unit would land in your hand.  Press the comb of the gas regulator back until the gas regulator disengages from the gas chamber (ca. 5 mm), rotate through 45 degrees either way and withdraw the entire gas assembly to the front, then separate the regulator from the gas piston and gas piston return spring.  All that is left to be separated from the receiver during field-stripping is the front cross-bolt, only holding the fore-end.  Now find and withdraw the firing pin retainer from the bolt carrier, withdraw the firing pin, then the bolt cam pin, and finally the bolt. Reassemble in reversed order. This photo shows the weapon’s behavior during firing quite well. Note the brass clearing the ejection opening, the bolt is just bouncing from the rear plate, and the only indication of the full recoil are slightly blurry vertical lines of the carry handle. Absolutely, positively no muzzle jump – the VHS recoils 100% flat.

Firing Range
First thing that one would surely remark after first grabbing it is – gosh, is that rifle light!  3.3 kilogram for the VHS-K carbine and 0.1 kg heavier for the VHS-D rifle – that’s light these days.  Of course, the original M16A1 with 2.9 kg was even lighter, but today most rifles hit the scales at closer to 4 kilos BEFORE any fashionable extras are added.  The weapon is remarkably well balanced with the loaded magazine in place.  The magazine exchange is difficult, as with all bull-pups: it’s not that natural and easy to place a magazine under your armpit.  Moreover, the peculiar form of the G36 magazine with all its coupling system side-protrusions does not lend itself to easy handling.

All shooting was done with the VHS-D and VHS-K at a 100-meter firing range, using only their own iron sights – which are of BUIS-quality at best.  For such a light weapon, the VHS is amazingly stabile.  The muzzle flip is almost nil.  Recoil can be felt, but 5.56mm is hardly a collar-bone buster.  We put close to a 1,000 rounds, Federal American Eagle .223 Rem 55 grs FMJ boat-tailed through it, and there was not a single failure to feed, fire, cycle or eject during that period, and the bolt was held open any time the rifle ran dry.

Accuracy-wise, semiautomatically from a sandbag rest, the VHS-K performed amazingly well at 100 meters, given the nature of the BUIS sights: 55 mm center-to-center.  Even more amazingly, the 100 mm longer-barreled VHS-D rifle did a worse job: 80 mm c-t-c.  The reason boiled down to the different sight picture: pin-thin front-sight blade all alone in a wide-open landscape for a rifle, vs. tunnel-shaded thick tapered post centered in the peep with a proper white halo.  HK sights rule, like it or not.  Even with that, the rifles did quite well with their BUIS-quality sights.